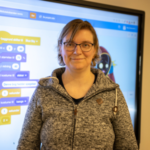 My name is Kirsten Dam Pedersen. I started this company “Scratch på dansk” back in 2017 but have taught both ScratchJr and Scratch to children and adults since 2012. Beside my company I also work as a school librarian and teacher at a public school in Denmark, Munkekærskolen in Solrød Strand. Here I am lucky to be able to teach our pupils and my fellow teachers in programming in different kind of subjects.

My journey with Scratch

Back in 2012 I worked as a children’s librarian at a public library in Sorø, Denmark. One day a man visited the library and asked if we would host a Scratch day at the library. He learned about Scratch from an American collegaue and would love to get his two sons interested in programming,  so they would not only use the computer for gaming. Luckily my leader said yes and a month later we held the first workshop in Scratch for 25 children – and I was sold and has both taught and played with Scratch ever since.

A lot of experience with teaching Scratch
Since 2012 I have taught more than 1300 kids and adults both in school and in their spare time.

A part of the translation team
In almost 10 years I have been one of the administrators for the Danish translation of Scratch. And as a librarian I know how important it is to use the same words anywhere . I am not a programmer but I think that has been an advantage in the translation because I have tried to use Danish words that kids already know  and can relate to and thereby better understand programming with Scratch.

Today and in the nearest future
I teach ScratchJr and Scratch from Kindergarten to 5th grade at my school. This year it is going to be in the subjects:

In my “spare” time in September 2022 I start a computer club in the local area where I live for kids between 12 and 18 years old who wants to be creative with coding. Among other projects they are going to be a part of the community music school’s concert where they will play on homemade instruments that is coded with Scratch and connected to the computer with Makey Makey.

I also have workshops for gifted children who wants to get better at programming and at the same time find new friends.

Why is it important to learn programming today?

What most schools don't teach

Back in 2013 Code.org made a video where famous Americans talked about some of the technologies they use in their jobs. They stated that knowledge about technology was – and is still – the new super power. Not because everyone should become programmers but so that users kan ask questions to technology and help with their development. And I agree.

There is also a shorter version of this video – What most schools don’t teach
The short version (5:43)